Fishing the Kamberg Trout Festival is regarded as participating in South Africa’s premier Trout Fishing event.  KTF is hosted in the awesome Kamberg Valley, where the Kamberg Community (affectionately known as the Kambergians) work together to offer their private waters to the entrants on an annual basis.

The Kambergians come together to enjoy the weekend with the fishermen, to swop stories, to chat about the best places at the dams to catch fish, how many fish have been catch, the ones that got away, funny incidents over the last 16 years and to catch up on friendships.  Although this is not a catch and release event, there is a bag limit per session with a minimum number of fish being allowed to be brought in for weigh in.

The Weigh In is almost more exciting than the catching as Testosterone levels are high waiting to see who brings in a bigger fish. 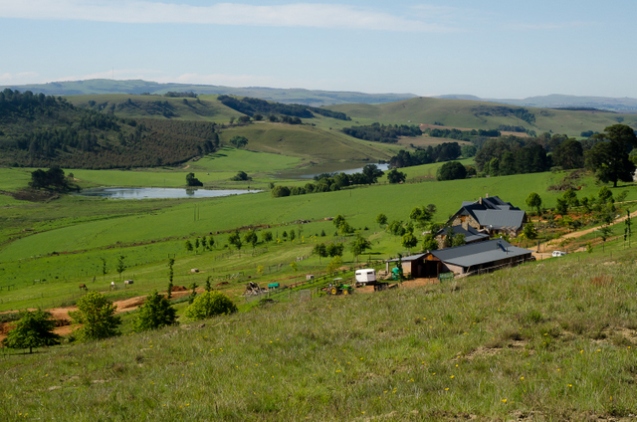 Sandstone Cottage sits within a working dairy farm with magnificent views to the Drakensberg and fly fishing a few steps from the door.

You could tour the Midlands Meander. Visit bushman paintings in the Drakensberg. Go horse riding or fishing. Take to the sky in a hot air balloon.

Or you could just relax.

The 15th Kamberg Trout Festival took place during the last weekend of May this year. Fifteen years of successfully running any festival of this ilk is a huge accomplishment, and this particular festival’s popularity seems to be ensuring its existence well into the future. Bell’s Whisky have been a stalwart supporter of the Kamberg Festival, along with by Xplorer Flyfishing and Engeleni Lodge. The inclusion of Spar as a major sponsor over the last few years has cemented the festival as one of the premier events of its type nationally.

THE Kamberg is my favourite mountain. This is not because it is particularly breathtaking, because as mountains go it actually isn’t. In fact, it’s more like a hill with attitude than a mountain, and most people need to have it pointed out to them as they focus on Giant’s Castle and the high peaks of the Berg away in the distance.

The Kamberg lacks the spires and lofty peaks that characterise the high Berg — a long, thin ridge of rock with grassy slopes gives way to forests and cliffs as you near the summit. However, anything lacking in the high mountain splendour department is more than compensated for by the lovely trout lakes that bejewel its slopes and the clean waters of two of the best brown trout rivers in the country that flow in its shadow. Heading towards the Kamberg from the sleepy hamlet of Rosetta you get your first good look at the Mooi as you cross the Meshlynn Bridge just outside town. If there has been a lot of rain, the river will be full and occasionally discoloured — bad omens if a river trip is your plan. During low or medium flow the water will be slow and deep green, and you can rest assured that conditions higher up the valley will be just great.

A little further on a glimpse of the Inchbrakie Falls from Vaalkop Hill should confirm the state of the river and possibly make you depress the accelerator a bit further than you ought to as you head into the Kamberg Valley and the river beats of the Mooi and Little Mooi. And what lovely rivers they are